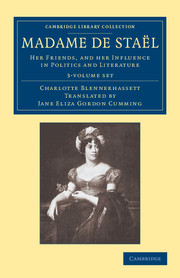 Madame de Staël
Her Friends, and her Influence in Politics and Literature
3 Volume Set