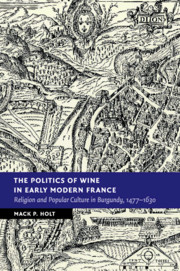 The Politics of Wine in Early Modern France
Religion and Popular Culture in Burgundy, 1477–1630