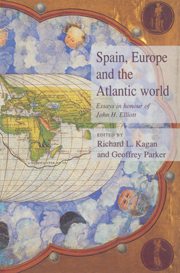 Spain, Europe and the Atlantic
Essays in Honour of John H. Elliott