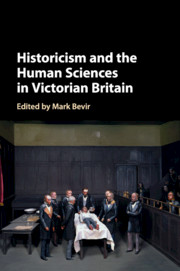 Historicism and the Human Sciences in Victorian Britain