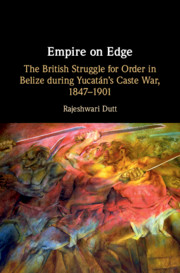 Empire on Edge
The British Struggle for Order in Belize during Yucatan's Caste War, 1847–1901