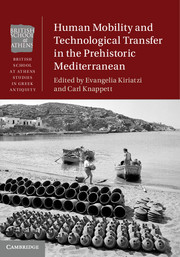 Human Mobility and Technological Transfer in the Prehistoric Mediterranean

Part of British School at Athens Studies in Greek Antiquity