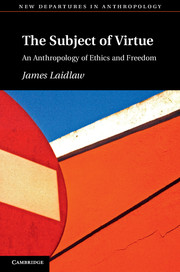 The Subject of Virtue
An Anthropology of Ethics and Freedom