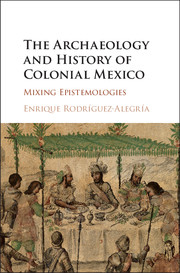 The Archaeology and History of Colonial Mexico
Mixing Epistemologies