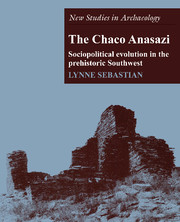 The Chaco Anasazi
Sociopolitical Evolution in the Prehistoric Southwest