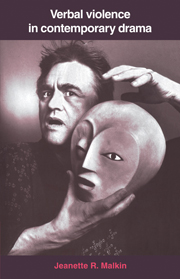 Verbal Violence in Contemporary Drama
From Handke to Shepard