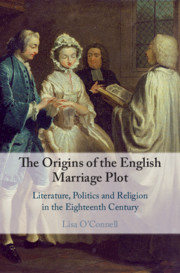 The Origins of the English Marriage Plot
Literature, Politics and Religion in the Eighteenth Century