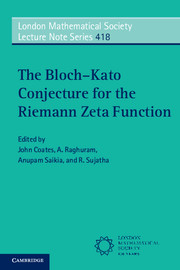 The Bloch–Kato Conjecture for the Riemann Zeta Function