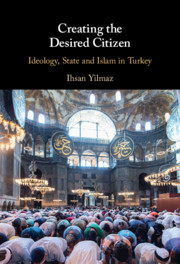 Creating the Desired Citizen
Ideology, State and Islam in Turkey