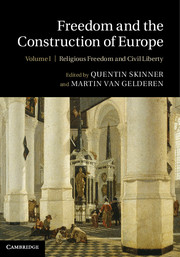 Freedom and the Construction of Europe
2 Volume Hardback Set