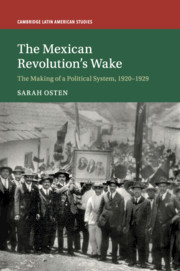 The Mexican Revolution's Wake
The Making of a Political System, 1920–1929