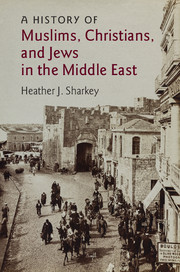 A History of Muslims, Christians, and Jews in the Middle East

An Interview with Heather Sharkey