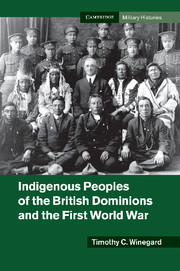 Indigenous Peoples of the British Dominions and the First World War