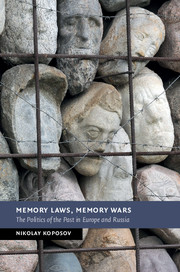 Memory Laws, Memory Wars
The Politics of the Past in Europe and Russia