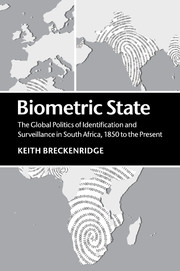 Biometric State
The Global Politics of Identification and Surveillance in South Africa, 1850 to the Present