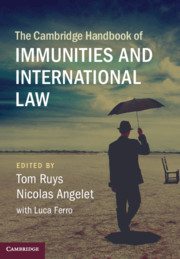 The Cambridge Handbook of Immunities and International Law