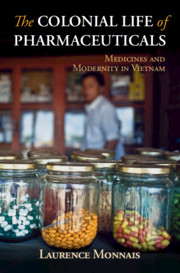 The Colonial Life of Pharmaceuticals
Medicines and Modernity in Vietnam