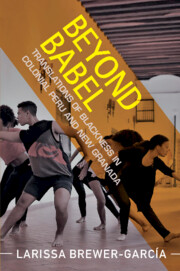 Beyond Babel
Translations of Blackness in Colonial Peru and New Granada