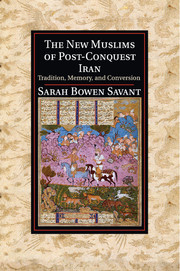 The New Muslims of Post-Conquest Iran
Tradition, Memory, and Conversion

An Interview with Sarah Bowen Savant