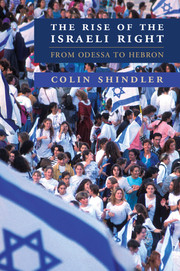 The Rise of the Israeli Right
From Odessa to Hebron