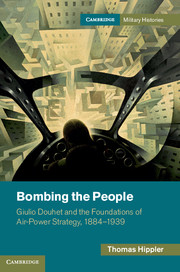 Bombing the People
Giulio Douhet and the Foundations of Air-Power Strategy, 1884–1939