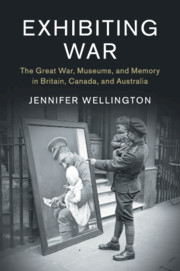 Exhibiting War
The Great War, Museums, and Memory in Britain, Canada, and Australia