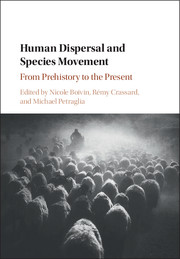 Human Dispersal and Species Movement
From Prehistory to the Present