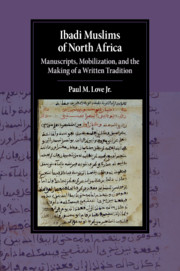 Ibadi Muslims of North Africa
Manuscripts, Mobilization, and the Making of a Written Tradition