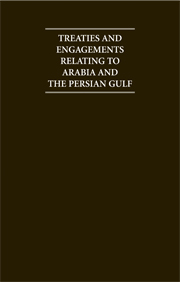 Treaties and Engagements Relating to Arabia and the Persian Gulf