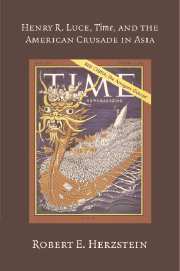 Henry R. Luce, Time, and the American Crusade in Asia