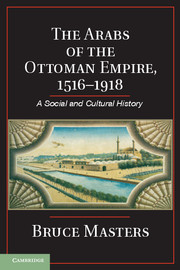 The Arabs of the Ottoman Empire, 1516–1918
A Social and Cultural History