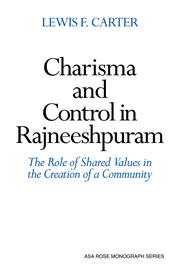 Charisma and Control in Rajneeshpuram
A Community without Shared Values