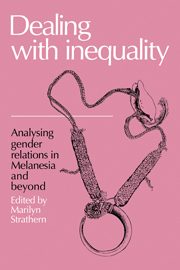 Dealing with Inequality
Analysing Gender Relations in Melanesia and Beyond