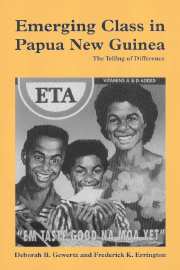 Emerging Class in Papua New Guinea
The Telling of Difference