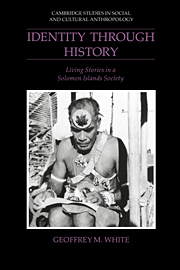 Identity through History
Living Stories in a Solomon Islands Society