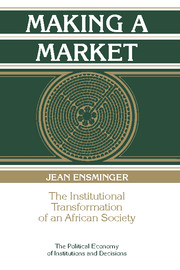 Making a Market
The Institutional Transformation of an African Society