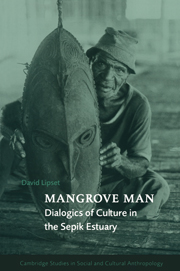 Mangrove Man
Dialogics of Culture in the Sepik Estuary