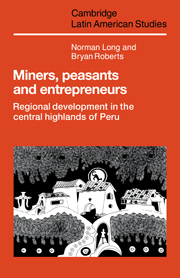 Miners, Peasants and Entrepreneurs
Regional Development in the Central Highlands of Peru