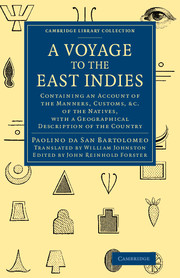 A Voyage to the East Indies
Containing an Account of the Manners, Customs, etc of the Natives, with a Geographical Description of the Country

Part of Cambridge Library Collection - Travel and Exploration in Asia