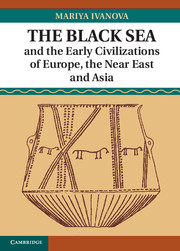 The Black Sea and the Early Civilizations of Europe, the Near East and Asia