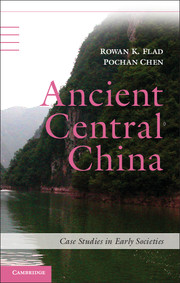 Ancient Central China
Centers and Peripheries along the Yangzi River