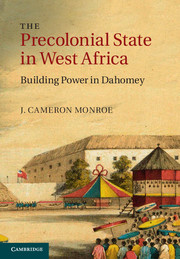 The Precolonial State in West Africa
Building Power in Dahomey