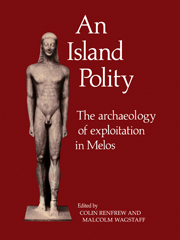 An Island Polity
The Archaeology of Exploitation in Melos