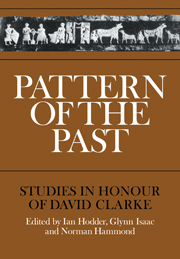 Pattern of the Past
Studies in the Honour of David Clarke