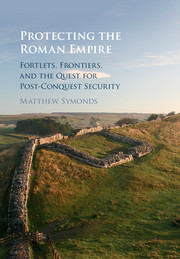 Protecting the Roman Empire
Fortlets, Frontiers, and the Quest for Post-Conquest Security