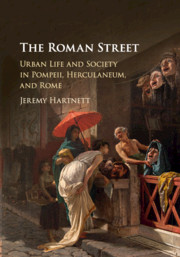 The Roman Street
Urban Life and Society in Pompeii, Herculaneum, and Rome