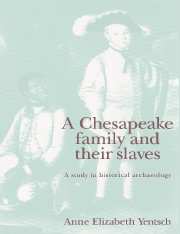 A Chesapeake Family and their Slaves
A Study in Historical Archaeology