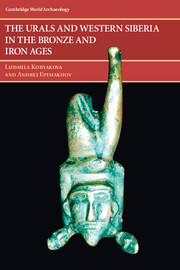 The Urals and Western Siberia in the Bronze and Iron Ages