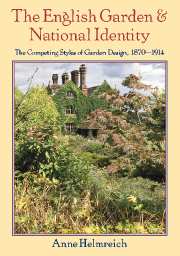 The English Garden and National Identity
The Competing Styles of Garden Design, 1870–1914