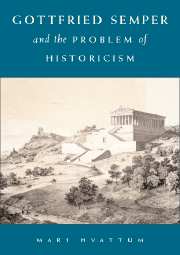 Gottfried Semper and the Problem of Historicism